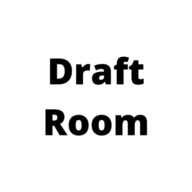 Tweet
the 1st round of the Bolt Beat Mock Draft